The first major commitments to the Institute were acknowledged in 1997 when business and corporate leaders established a $500,000 endowment to be used to provide public programming at the Institute. In 1998, the Institute was officially designated the D.B. Reinhart Institute for Ethics in Leadership. The Institute was begun in 1999.

As a values-based institution, the university commits itself to developing a distinctive national reputation for designing undergraduate and graduate curricula emphasizing moral and ethical issues. Viterbo is one of the few universities in the U.S. that has curricula in which every class has a moral or value component which emphasizes the ethical issues relative to the particular subject matter of that course. Development of the critical intellect within an ethical framework in every academic discipline is unique. 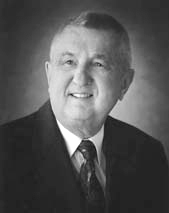 The designation of the Institute in memory of D.B. Reinhart culminates a 30-year relationship between Mr. Reinhart and Viterbo University.

D.B. Reinhart was an exemplary business leader and mentor as well as a good friend and advisor to Viterbo University. "Rhiny," as he was known to his friends, accomplished much during his life. As an entrepreneur, philanthropist, leader and a "self-made" man, he was inducted in 1989 into the prestigious Horatio Alger Association of Distinguished Americans. As founder and owner of Gateway Foods, he turned his La Crosse based food company into the largest privately owned food wholesaler in the country.

Despite his success, Mr. Reinhart considered his greatest assets to be his family, his faith, and his community. He was a quiet leader whose presence assured the success of many initiatives and organizations. He consistently promoted ethical decision-making and lived a life of integrity. He cared deeply about people, his friends, and his business associates.

D.B. Reinhart was the recipient of two of Viterbo's most prestigious honors: the 1980 Pope John XXIII Award for Distinguished Service and a 1990 Doctor of Laws honorary degree.

Mr. Reinhart, who died in 1996, is survived by his sons, Rob and John, and daughters, Nancy and Patricia.