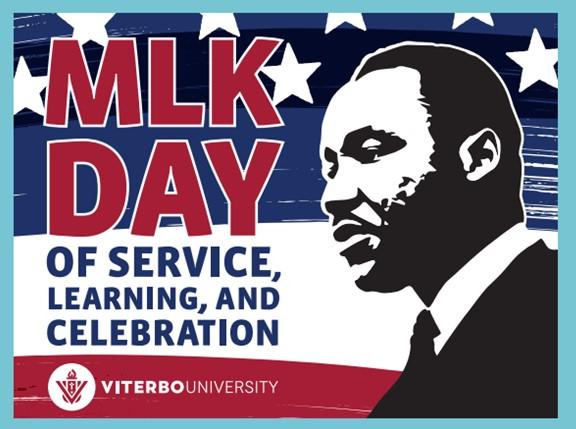 On Monday, Jan. 18 Viterbo University will honor Dr. Martin Luther King, Jr. with a day dedicated to a variety of engagement opportunities that not only uplift the life and legacy of Dr. Martin Luther King, Jr. but provide spaces of learning, service, and advocacy with our underrepresented and marginalized communities in the Coulee Region and beyond.

We are still actively looking for more volunteers. Please scroll to the bottom and sign up to join in a great day of engagement opportunities.

Questions or concerns? Reach out to any of the following individuals

Sign up to participate in service to local community organizations in the Coulee Region.

To view and sign up for service opportunities click HERE. This link will direct you to the UGetConnected webpage.

**Please make sure you are logging into the Viterbo-specific UGetConnected website by following the instructions below.  Do not go through the community portal (yellow/blue branding instead of Viterbo logo/branding).

You must sign up for a service site by Saturday, Jan. 16

Are you a Viterbo faculty or staff member? We are still looking for Site Leaders. Sign up to volunteer to be a Site Leader HERE

Viterbo employees and students are encouraged to bring donations to campus on Monday, Jan. 18.  The Exchange and The Parenting Place have both requested donations to help support the guests they serve.  We'll be accepting donations in Nursing Center 104 from 9–11 a.m.

Enjoy an authentic inspired Cuban lunch of rice, beans, and plantains. The meal is included in the student meal plan. Viterbo community members that do not have a meal plan can still enjoy  with a credit card purchase on site.

Learn about the experiences of individuals who were one of the 14,000 refugees from Cuba in 1980 to go to Fort McCoy and await sponsorship from local individuals and families. Panelists will share their experiences immigrating and their  lives in the United States in the 40+ years since their arrival.

WOW! We had an incredible turn out for this event and we have reached our Zoom capacity. Please check back here for the recording of the event soon!

We will only be broadcasting this event virtually. You can access the event HERE

Accompanying this panel is a photo exhibit in the Nursing Foyer, open for the Viterbo Community and public to visit. The exhibit will also be displayed in the Fine Arts Center for one month after MLK Day.

If you were unable to attend the event click HERE to view the recording!

Attend a guided tour where you will visit locations in downtown La Crosse following the Voices of La Crosse: Racial (In)Justice - A Tour of Black Experiences in Downtown La Crosse. Tours are leaving at 2 p.m., 3 p.m., and 4 p.m. from the Prayer Garden outside of Campus Ministry. Tours are led by Viterbo faculty and staff members and will last approximately 90 minutes visiting a few of the Hear, Here locations.

The Enduring Families Project is sponsored by the La Crosse Historical Society and hosts numerous opportunities for individuals to learn about the local La Crosse history of African Americans and other non-white settlers. Click here to watch three videos of historical re-enactments of local historical icons.

We are lucky enough to host a panel of individuals that helped bring the Enduring Families Project to life! You will be able to hear from our panelists:

On Your Own Engagement Opportunities

The Enduring Families Project is sponsored by the La Crosse Historical Society and hosts numerous opportunities for individuals to learn about the local La Crosse history of African Americans and other non-white settlers. Click here to watch three videos of historical re-enactments of local historical icons.

The Rev. Dr. William J. Barber II is the President & Senior Lecturer of Repairers of the Breach, Co-Chair of the Poor People’s Campaign: A National Call For Moral Revival; Bishop with The Fellowship of Affirming Ministries; Visiting Professor at Union Theological Seminary; Pastor of Greenleaf Christian Church, Disciples of Christ in Goldsboro, North Carolina, and the author of four books: We Are Called to Be a Movement; Revive Us Again: Vision and Action in Moral Organizing; The Third Reconstruction: How a Moral Movement Is Overcoming the Politics of Division and Fear; and Forward Together: A Moral Message for the Nation.

Rev. Dr. Barber is also the architect of the Forward Together Moral Movement that gained national acclaim with its Moral Monday protests at the North Carolina General Assembly in 2013. These weekly actions drew tens of thousands of North Carolinians and other moral witnesses to the state legislature. More than 1,200 peaceful protesters were arrested, handcuffed and jailed. On September 12, 2016 Rev. Dr. Barber led a “Moral Day of Action,” the largest coordinated action on state capitals in U.S. history, calling for state governments to embrace a moral public policy agenda. On February 11, 2017, he led the largest moral march in North Carolina state history, with over 80,000 people calling on North Carolina’s elected officials to embrace a moral public policy agenda.

Rev. Dr. Barber served as president of the North Carolina NAACP, the largest state conference in the South, from 2006 - 2017 and currently sits on the National NAACP Board of Directors. A former Mel King Fellow at MIT, he is currently Visiting Professor of Public Theology and Activism at Union Theological Seminary and is a Senior Fellow at Auburn Seminary. Rev. Dr. Barber is regularly featured in media outlets such as MSNBC, CNN, New York Times, Washington Post, and The Nation Magazine, among others. He is the 2015 recipient of the Puffin Award and the Franklin D. Roosevelt Four Freedoms Award, a 2018 MacArthur Foundation genius award recipient, and he is one of the 2019 recipients of the North Carolina Award, the state’s highest civilian honor.

Juneteenth is celebrated to commemorate the days when freedom came to the last African American slaves in Texas in 1865.

There were pivotal individuals in history that lived right here in La Crosse that deserve to be celebrated. You are able to learn about La Crosse history by accessing the recordings from the event HERE

Celebrations to honor Dr. Martin Luther King Jr. are happening all over the United States on January, 18 2021. Click HERE to access the national MLK Day of Service website to learn more about Dr. MLK Jr.'s legacy and service projects happening around the country.

The Service Saturday Team has provided an excellent resource for anyone wanting to engage more with anti-racism! This resource provides a variety of opportunities to engage including podcasts, books, reflection tools, as well as tangible action steps you can take today!

Please know you can support these businesses and other organizations financially, but you can also promote their businesses on social media and provide recommendations to show your support!

We invite all Viterbo community members (students, employees, faculty, and administrators) to join us in a great lineup of events and activities for the Dr. Martin Luther King Jr: A Day of Learning, Service, and Celebration!

We know social justice and equity work is incredibly important and a life-long process. We hope all Viterbo community members engage in the MLK Day of Learning, Service, and Celebration and take time to reflect on your experiences and lessons learned.

To help in your reflection and contemplation, we encourage you to use these questions as a jumping off point as you continue to process:

Race Card Project --- What have been your personal experiences talking about your race? For example, how old were you when you first realized that race existed? Who did you have conversations with? What feelings/reactions do you experience when having conversations about race?

Panel of Mariel Boatlift Refugees--  Did you know about the Mariel Boatlift and the plight of the Mariel refugees before viewing the panel on Monday, January 18? Why or why not? Do you think it is significant that many do not know about an event in which 14,000 individuals arrived to a place 45 minutes from La Crosse in 1980? Is there some reason why we might not have learned about this sort of event in school or in the community? Are there other stories like these that exist in our communities that for some reason we have not yet learned about? What are the underlying reasons for not knowing such histories?

Hear, Here Walking Tours--- What thoughts and feelings did you have as you listened to the stories of your fellow community members? Think of a time you felt completely welcome and included; what factors contributed to your experience of feeling welcome and included?

Enduring Families Panel---Prior to the panel have you heard about the experiences of  George Edwin Taylor and George Poage? Why or why not? Why is it important to understand the impact of historical people of color? Thinking about the communities you are from, are there stories or experiences that you think are not captured? How would you go about finding these stories and experiences?

Evening Keynote Celebration -- The keynote this evening, William Barber is the Co-Chair to the Poor People's Movement, which was started by Dr. Martin Luther King Jr. in the 1960's. What is the significance of this? Why is this important?