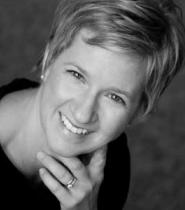 Soprano Dr. Ann Schoenecker has performed multiple genres of music from opera to oratorio to music theatre throughout the U.S. and Europe. Dr. Schoenecker has held teaching positions at the Performing Arts Studios, Vienna, Austria, Luther College, University of Minnesota, University of Missouri-Columbia and currently at Viterbo University in La Crosse, Wis. Dr. Schoenecker teaches functional voice training and crosses many genres of music from classical, music theatre, pop and rock. She is sought after nationally and internationally as a singer, teacher and clinician in classical, music theatre and show choir. Her students have competed and performed on international and national stages in opera and music theatre , are highly sought after as music educators and have gone on to top graduate programs in voice. Schoenecker is a former regional Metropolitan Opera finalist, finalist in the Jenny Lind National Competition for Sopranos, and has sung many roles with Opera Boston among others. Dr. Schoenecker is a graduate of Luther College, the University of Missouri-Columbia under the tutelage of Costanza Cuccaro, and the University of Minnesota where she received a DMA in vocal performance under Lawrence Weller and Clifton Ware. She also carries three certificates in Contemporary and Commercial Music Vocal Pedagogy from Shenandoah Conservatory of Music and a certificate in Vocal Pedagogy from the University of Minnesota-Twin Cities. Dr. Schoenecker serves on the board of the Wisconsin National Association of Teachers of Singing. She is chair and associate professor of music in the music department at Viterbo University, teaching applied voice (cross genre), lyric diction, song literature, and opera literature. Dr. Schoenecker resides in Onalaska, Wis., with her husband and four daughters.