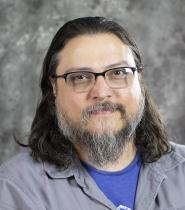 Benjamin is an assistant professor teaching in the areas of theatre history and literature at Viterbo University. He previously served as a guest instructor for lighting design and theatre technology at the University of Central Missouri and is also formerly an associate clinical professor who taught an array of theatrical subjects at Washington State University that included lighting design, playwriting, and media literacy. Benjamin recently earned an MFA in Theatre Arts (focused on dramatic writing) from the University of Idaho. He also has received his master's in teaching and Bachelor of Arts in Theatre Arts and Drama from Washington State University.

Benjamin currently serves as the national vice-chair of the Kennedy Center American College Theatre Festival's (KCACTF) National Playwriting Program (NPP) and has previously served as the representation, equity, and diversity (RED) Coordinator. Professionally, Benjamin is a theatre generalist with experience in lighting design, set design, sound design, technical direction, production management, direction, as well as playwriting. He specializes in writing verbatim plays that highlight the stories of students who have in some way been marginalized. He also writes scenes and short plays for his students to use for contemporary scene work.