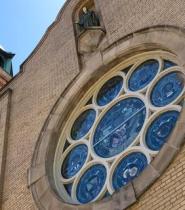 The Catholic Identity of the University is rooted in our Mission, the Gospel values of radical hospitality, service, stewardship, integrity, contemplation, and in the legacy and vision of our founders, the Franciscan Sisters of Perpetual Adoration. As an institution Catholic in faith and tradition, we commit ourselves to creating an inclusive environment where persons of all faiths and no faith are welcomed.  In the Franciscan spirit, we expect and value mutual respect, by all and for all, in our pursuit of knowledge and truth and in our search for the sacred. University is proud to be the only Catholic university in the Diocese of La Crosse and to participate directly in the life of the local Church.

What Are the Formal Elements of Catholic Identity at Viterbo University?

How Closely Does Viterbo Follow Catholic Teaching In the Classroom?

As a University, we are:

What Does Catholic Sacramental and Devotional Life Look Like At Viterbo?

Viterbo University is proud to be one of only 23 Franciscan universities in the U.S. As a member of the Association of Franciscan Colleges and Universities, Viterbo works collaboratively with other Franciscan institutions to deepen Franciscan research and to offer students and employees unique opportunities for Franciscan programming.

Founded by the Franciscan Sisters of Perpetual Adoration, Viterbo is a Catholic, Franciscan University in the liberal arts tradition.

In keeping with the tradition of our Franciscan founders, we hold the following core values:

A Catholic, Franciscan university boldly transforming students and our communities through service, collaboration, and leadership. 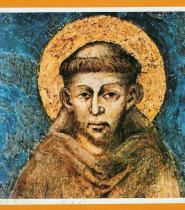 Francis' (1182 - 1226) parents were Pica and Pietro Bernadone, members of Assisi's merchant class. As a young man, Francis lived a carefree, luxurious life, leading his companions in singing, dancing, and merrymaking. He aspired to become a knight in the warring conflicts between Assisi and Perugia, a neighboring city-state.  After being held as a prisoner of war and suffering a long illness, Francis abandoned his worldly ambitions and wealth and set upon a journey that led him toward the values and lifestyle of the Gospels. He lived life without compromise and embraced radical poverty, kinship with all people, and oneness with nature. Francis radiated joy and remained engagingly human throughout his life.  He preached to the people and prayed in solitude with equal passion.

Francis taught his followers and companions to use the greeting: “May the Lord give you peace!” and as they proclaimed peace by their words, to carry an ever greater peace in their hearts.  With all his heart, Francis longed to be totally identified with Jesus Christ. During an intense, mystical experience of the sufferings of Jesus, Francis received the stigmata, the imprints of Christ's wounds, on his hands, feet, and side while praying on Mount LaVerna in September of 1224.

As others followed in the way of Francis, the Franciscan movement was established for both men and women, offering a lifestyle focused on Gospel living, conversion, peacemaking, contemplation, simplicity, and joy. Francis died in October of 1226 and was declared a saint in 1228.

Read about Fr. Conrad Targonski's perspective on Franciscan ministry to veterans in the November edition of the St. Anthony Messenger. 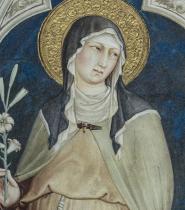 On Palm Sunday, 1212, Clare took a bold step on her spiritual journey. She renounced her privileged position in the nobility and received the garb of the followers of Francis. Eventually, she made her home at San Damiano in a small church repaired by Francis, just below the city of Assisi. Clare's sister, Agnes, joined her as well as many women from the area. Under God's guidance, Clare created a new path for women, embracing poverty, humility, and charity as companions on their journey.

The Gospels provided the central focus of the Poor Ladies' lives as well as the inspiration and example of Francis and the brothers. They ate whatever food the brothers begged for them, wore simple clothing, gardened and wove cloth. At age 21, Clare agreed to accept the role of abbess, and until she died, at about age 60, lived among her sisters as one who served. She called her companions “sisters” rather than “nuns,” as was the custom of the times and urged them to be examples and mirrors of God.

Clare requested and received the Privilege of Poverty (living without communal property or individual possessions) in 1216 from Pope Innocent III but did not receive full approval for her form of life until she lay on her deathbed. She was the first woman in the history of the church to have written a rule for women.  Considered a co-founder of the Franciscan movement, she was declared a saint in 1255.

The precise years of Rose of Viterbo's life and death are uncertain. Most scholars agree she was probably born around the year 1233 (and died in 1251). It was the season when roses were beginning to bloom and the fourth Sunday of Lent, the Sunday of the Rose. For her parents, the name Rose signified the beauty of the virtues and the love of God.

Giving bread to the less fortunate was a sign of Rose's conversion and a symbol of the suffering Christ's presence in the lives of the poor.

In 1250 when Rose was 17 years old, she clothed herself in the dress of a Franciscan, wearing a simple garb with a cord around her waist. While walking the streets with a crucifix in her hand, she exhorted others to be faithful to the church.

St. Rose of Viterbo, Virgin of the Third Order of St. Francis, rendered her city famous by her holiness of life, a great number of miracles, and the wonderful integrity of her incorrupt body.  Viterbo University is named in her honor. 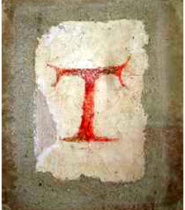 Francis used the Tau in the hope of salvation in his writings, painted it on the walls and doors of the places where he stayed, and used it as his only signature on his writings. 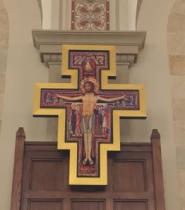 Is the one St. Francis was praying at before he received the commission from the Lord to rebuild the Church. The original cross presently hangs in Santa Chiara (St. Clare) Church in Assisi, Italy. All Franciscans cherish his cross as the symbol of their mission from God. The cross is called an icon cross because it contains images of people who have a part in the meaning of the cross. The tradition of such crosses began in the eastern Church and was transported by Serbian monks to the Umbria district of Italy. 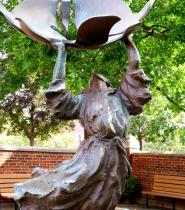 Created by Paul T. Granlund for Viterbo's campus, this bronze sculpture of St. Francis of Assisi shows the Saint holding a disc representing the sun.  The round firmament on which St. Francis dances ever so slightly in the moon.  In the disk there is a silhouette of the body of Christ and with the sky above, the silhouette reflects down on the figure of Francis.  The hands of Dancing Francis touch the sun at the spot where Jesus' wounded hands are extended.  His feet dance and his habit flies in the wind because his hands play with the burning fire of the cross. 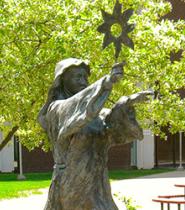 Created by David Kocka for Viterbo's campus, Dancing Clare is a visual companion to Dancing Francis.  Dancing Clare celebrates the feminine poise, referring also back to a typical image of Clare with the Eucharist symoblizing a non-violent approach to staving off invaders.