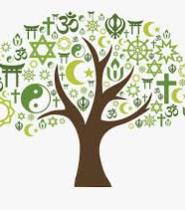 The word "interfaith" describes an interaction between people of different religions or faith traditions.  But it is more than that. It is about understanding our significant differences, but also recognizing our similarities, and working together for peace, justice and healing in our world (United Religions Initiative).

Interfaith cooperation is not about renouncing religions, or combining all religions into one. In fact, many people find that their friendships with people in other traditions strengthen their understanding and respect for their own tradition.  Interfaith friendships reach out across the stereotypes and misunderstandings that lead to religiously-motivated violence. They reinforce the idea that, regardless of religion or belief tradition, every human deserves respect.

Following the Franciscan tradition of seeking common ground with people of other faiths, Viterbo University seeks the promotion of ecumenical and interfaith understanding.  Through worship, reflection, service and dialogue, we are committed to fostering understanding and respect between and among various faith traditions.

The Viterbo campus community is welcome to use the interfaith prayer room for prayer, reflection and meditation. It is located on the 1st floor of Campus Ministry Building. It can be accessed by swipe card and is open during the same hours that the building is open. Prayer mats, cushions and various sacred texts and prayer books are available for use. Please remove your shoes before entering the room. If additional interfaith prayer space is needed, please contact Emilio Alvarez in Campus Ministry (ebalvarez@viterbo.edu) about reserving a larger space for particular days and times.

El-Hibri Foundation
The El-Hibri Foundation (EHF) is a philanthropic organization that empowers and equips Muslim leaders and their allies to build thriving, inclusive communities. EHF makes grants and implements innovative programs to provide resources and skills, forge collaborative relationships, and increase inclusion of and within American Muslim communities.

Hillel
Hillel is dedicated to the support of Jewish college students and actively works to encourage generations of young adults to celebrate Jewish learning and living.  Their mission is “to enrich the lives of Jewish students so that they may enrich the Jewish people and the world.”

Hindu American Foundation
HAF focuses on educating the public about Hindus and Hinduism and advocating for policies and practices that ensure the well-being of all people and the planet.

Interfaith Youth Core (Chicago)
IFYC is a national nonprofit that equips the next generation of citizens and professionals with the knowledge and skills needed for leadership in a religiously diverse world. Partnering with higher education institutions and corporations, IFYC is dedicated to making interfaith cooperation the norm and building Interfaith America in the 21st century.

Library of World Religions and Faith Traditions
Written by the world's leading authorities on religion and spirituality, it offers accurate, balanced information about the origins, history, beliefs, rituals, ethics and community structures of various world religions.

Nostra Aetate:
This Declaration of the Second Vatican Council (Catholic Church) is a standard in interfaith relations. This document initiated new understandings and new directions in the area of promoting dialogue and reconciliation with the followers of other religions.

Pontifical Council for Interreligious Dialogue:
Since Vatican II, an explosion of interfaith activity has occurred within the international Catholic community and at all levels of Church, including lay people, teachers, academics, social activists, monks, missioners, priests, bishops and popes. In 1964, Pope Paul VI began building a Catholic infrastructure to nourish his dream of a Church in conversation with other religions and cultures.

Religion News Service
This non-profit strives to inform, illuminate and inspire public discourse on matters relating to belief and convictions. They collect writing on religion, spirituality and ideas from a variety of reputable sources.