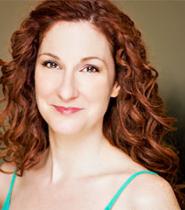 Karla Hughes heads the music theatre voice area at Viterbo where she instructs vocalists in a wide variety of genres including music theatre (legit and belt), classical, pop, rock, gospel, country, and R&B. In addition to her work as a voice instructor, she has also taught acting and stage movement courses and works as a music director. Former voice students have gone on to perform on Broadway (Six the Musical, Amélie, A Bronx Tale the Musical, Tina; The Tina Turner Musical), off-Broadway musicals, national and international tours, international cruise lines, regional and international theaters, voice overs for animated Disney films, and have been featured vocalists on national public radio (NPR) and television programs (ABC, NBC). As a professional musician Karla has performed throughout the U.S. with opera, musical theater, and theater companies and is represented by Wade Artist Management (NYC). Hailed as displaying "vocal pyrotechnics” and "effortless dexterity" (Opera News), being “nimble of voice and feet” (The Toledo Blade), and "exceedingly convincing [as an actress]" (Opera News) she is equally talented as a vocalist, actress, and dancer. Highlights from Karla's performing career include Zerlina in Don Giovanni, Ellen in Lakmé, and Barbarina in Le Nozze di Figaro with Michigan Opera Theater, Flora in Turn of the Screw with the Toledo Opera, Valencienne in The Merry Widow, Dainty June in Gypsy, and Hodel in Fiddler on the Roof with The Ohio Light Opera, and Sophie in Terrence McNally’s Master Class with Chamber Theater (Milwaukee).  In 2011, Karla made her Lincoln Center debut as the soprano soloist in Mozart’s Coronation Mass, presented by Distinguished Concerts International New York (DCINY). As a recording artist, she can be heard on over 15 different titles with Albany Records and Newport Classics including the roles of Mabel in the Pirates of Penzance and Yum-Yum in The Mikado. Karla earned a Master of Music in Opera Performance at Wichita State University and a Bachelor of Arts in Music at Colorado State University.