Viterbo University honored nine graduates at its annual Distinguished Alumni Awards ceremony Friday, Oct. 7, as part of Viterbo Days. The ceremony featured a performance by members of the Marianettes singing group that did a European USO concert tour in 1972.

Viterbo’s alumni awards, which go back to 1967, this year honor five alumni with professional achievement awards, one from each college, and include two rising professional awards. In addition, the tradition of honoring alumni with the Spirit of Francis Award and Service to the University Award continues.

Winners of 2022 Distinguished Alumni Awards include the following:

After graduating with a bachelor’s degree in biopsychology, Jed Barton devoted a year to volunteer service. At the end of his volunteer year, he stayed on as clinic manager at Christ House, a Washington, D.C., respite center for men experiencing homelessness and dealing with medical issues. Meanwhile, Barton, who has completed work on his master’s degree in servant leadership, also volunteered his time with an affordable housing organization and an LGBTQ+ youth program. Barton recently started a new position at the National Association of Community Health Centers (NACHC) in the development and innovation division. Collectively, the 1,400 community health centers in all 50 states, the District of Columbia, and the U.S. territories care for nearly 30 million people regardless of ability to pay.

A business administration major who played baseball and basketball at Viterbo, Brian Soller credited the scholarships he received for making his education possible. He has made it a mission to show gratitude for that help and pay it forward, establishing a scholarship fund for basketball players and serving since 2014 on the Viterbo Board of Trustees. After graduation, Soller landed a job at Anderson Consulting (now Accenture), one of the largest consulting firms in the world. For the past 20 years, Soller has worked in technology leadership roles at UnitedHealth Group, where he is currently a senior vice president responsible for all corporate technology, leading a team of nearly 2,000 technology professionals worldwide.

Working on her Viterbo MBA helped Libby Weber develop as a confident and empathetic leader at work and in the community. Her leadership was put to the test during the early days of the pandemic when she took over as CEO of The Weber Group, which is based in downtown La Crosse. As CEO, she is responsible for overall operations and business development for 12 companies that fall under The Weber Group in hospitality, health care and wellness, and real estate development (with about 430 employees). Weber also serves as president of The Idea Fund, which provides capital funds to startup companies. After earning her Viterbo MBA, Weber also went on to earn a master's degree in communication and leadership at Gonzaga University.

A biology major and standout basketball player who captained the team for two years, Rebecca (Arndt) Crecente went on to earn a doctoral degree in physical therapy from Duke University. Since completing her Sports Physical Therapy Residency Program at Gundersen Sports Medicine in Onalaska, Crecente has worked as a clinical specialist in sports physical therapy at ATI Physical Therapy in Greenville, S.C. In addition to her physical therapy practice, she is involved in training future physical therapists in the clinic’s residency program. On top of helping athletes, Crecente remains an avid athlete herself, competing in triathlons and marathons  — she ran in the 2017 Boston Marathon.

After earning her Viterbo nursing degree, Donna (Role) Nelson started her career working in obstetrics at Vernon Memorial Healthcare in Viroqua, the same hospital in which she was born. Early on, she became involved in managing and developing the hospital’s hospice program, co-chairing a capital campaign to build an inpatient hospice facility that was completed in 2013. Her success with the hospice program was rewarded with a promotion to manager of development/foundation and volunteer services. Retiring at the end of 2020 after 37 years of service, Nelson spent the final months of her career providing nursing oversight and care for residents in Vernon Memorial’s two assisted living facilities.

Mark Gruen credits his education master’s degree work at Viterbo with opening his eyes to new opportunities to make a difference in education beyond the classroom. After stints as an activities director and principal, Gruen has served as district administrator, leading the Eleva-Strum School District and the Royall School District, where he was honored as Wisconsin Superintendent of the Year by the Wisconsin Association of School District Administration in 2020 and Rural Administrator of the Year by the Wisconsin Rural Schools Alliance in 2021. Early in 2022, he was chosen as the superintendent/business manager for the Johnson Creek School District. He has a long history of involvement in civic and professional organizations, including serving 13 years on the Wisconsin Interscholastic Athletic Association (WIAA) Advisory Council, with the distinction of being the first member to be twice selected as president of the Advisory Council.

Barry Lee Moe came to Viterbo intent on a career as a performer, but a nudge from an insightful professor helped him discover a passion and gift for other theatrical arts — costuming and, especially, hair. Since graduating, Moe has used his hair styling skills in a variety of settings, from Broadway shows to concert tours (including Tori Amos), but he has gained notoriety and accolades for his work in television. Moe has won two Emmy Awards for the work of hair styling teams he has led in production of Pose and Hollywood. He’s been nominated for a total of five Emmy Awards, including the latest one for the Hulu limited series Pam & Tommy. Moe also has been nominated for five Hollywood Makeup Artist and Hair Stylist Guild Awards, winning one in 2021 for his work on the promotional campaign and music videos for Pose. His latest project, to premiere later this year on Hulu, is Welcome to Chippendales, a limited series about the exotic male dance revue from Robert Siegel, creator of Pose. He also was on the team that produced Loot, the Apple TV+ original comedy series starring Maya Rudolph.

As a music theatre student at Viterbo, Jhardon DiShon Milton did more than share his talents on stage. He shared his time with the young members of the Mathy Center Boys & Girls Club, spending most of his summers working there instead of going back to his native Houston. Since graduating from Viterbo, Milton's performing career has been on a steady upward arc, starting with regional theatre work in Chicago and moving on to Broadway (including A Bronx Tale,  directed by Robert DeNiro, and TINA: The Tina Turner Musical, which closed in August 2022) and television roles on shows including Blue Bloods, And Just Like That, and Harlem. This fall, he will make his New York debut in a leading role, starring as Jonah in Roundabout Theatre Company’s production of The Bandaged Place by Harrison David Rivers.

After earning her Viterbo degree in chemistry (with a mathematics minor), Elizabeth (Eckert) Maher went on to earn a doctoral degree in clinical and translational science from Mayo Clinic Graduate School of Biomedical Sciences, where she mentored undergraduate students in biomedical research and contributed to the Food and Drug Administration application for an investigational device as an internship awardee. During graduate school she also got involved as a volunteer with a Mayo program called Brainwaves devoted to encouraging K-12 students to get interested in science. She now provides medical education, clinical trial support, pipeline presentations, and conference updates to retina specialists in a six-state territory as an ophthalmology medical science liaison for Genentech. The company has honored her work with an Innovator Award and an External Impact Award. 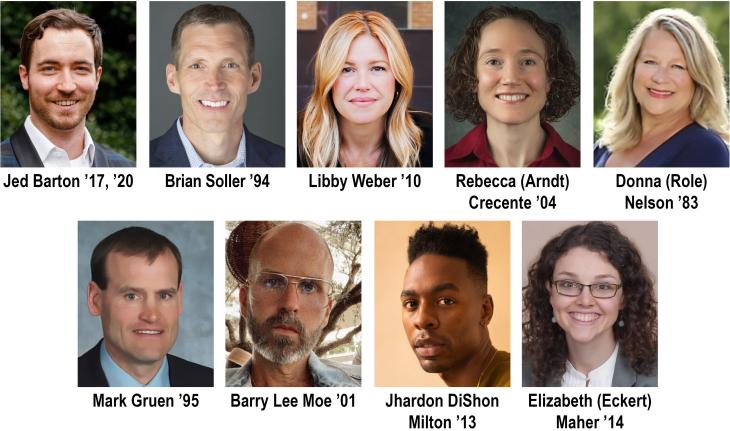