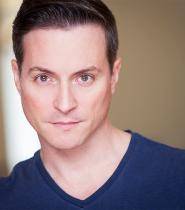 Shane Rhoades is an assistant professor in Viterbo University’s Conservatory for the Performing Arts in the Theatre and Music Theatre Department.  Prior to his time at Viterbo, he lived and worked in New York City for 20 years.  Shane directed and choreographed Viterbo’s productions of CATS, A Chorus Line, Shout!, and Little Women.  He also choreographed 9 to 5, Pippin, West Side Story, Oklahoma!, A Midsummer Night’s Dream, Dancing at Lughnasa, She Stoops to Conquer, and On the Verge.  Shane serves as the dance minor coordinator and director for Dance Kaleidoscope.  He is the co-director for Viterbo’s show choirs, Platinum Edition and Diamond Edition, and he serves as a clinician and judge for numerous show choir competitions around the country.  He made his Broadway debut in The Boy From Oz starring Hugh Jackman, and he was the associate choreographer for Broadway’s How The Grinch Stole Christmas.  Off-Broadway he danced in FAME on 42nd St.  His national and international touring credits include Pippin, A Chorus Line, West Side Story, Chicago, Seven Brides for Seven Brothers, and Grinch.  Regionally he has performed at Paper Mill Playhouse, Goodspeed Opera House, Arena Stage, The Ordway, North Shore Music Theatre, St. Louis MUNY, Pittsburgh CLO, Sacramento Music Circus, Atlanta Theater of the Stars, Houston Theatre Under the Stars, and Stages St. Louis.