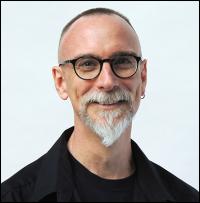 Jeff was such an important part of the department and consequently an important part of every theatre students’ education, regardless of specific major. He was in charge of our weekly forum meetings, and always mentioned that it was called “Forum!” with an exclaimation point because it sounded more exciting that way.

For being such a brilliant costume designer, I always found it interesting that he sported the same black t-shirt everyday. I once said he reminded me of a cartoon character because of his signature look, and he willingly accepted the compliment.

I only pulled two all-nighters in my college career, and they both happened to be for Costuming class. Between the Barbie, sewing the shirt, costume history project, and the merging of the two ugly prom dresses, he had an intriguing way of sparking creativity out of all of us. Makeup class was another beast, and I will never forget the grace I received from him when I accidentally missed the final exam.

We will miss his kind, delightfully spunky attitude and the true artistry that was given to us. Thank you Jeff.

I don’t know why Jeff chose to ask me to do this, but he had me help design some wigs for a production. He thought it would be a good project for me. I think he saw a creative spark in me that needed to be explored. It just set me on this creative path where I was like, this is amazing. I can’t believe I’ve been ignoring this my whole life.

He was one of those real-life angels at Viterbo who just openly embraced every student. He saw those of us who were maybe on a misguided path and saw something more. If he wouldn’t have done that with me, I don’t know where I’d be today.

I learned to make my own costumes from him. I learned SFX makeup from him. The classes I took from him, changed my life. After college, I started my SFX makeup journey and still haven't stopped. I loved working with him. He was a great inspiration to all of us.

My heart stopped when I got the news. He was so young and he had lots to teach. I pray for this wonderful teacher and all of his family and loved ones. It was an honour to have met him and work with him as his former Turkish student. I will miss him terribly. May his soul rest in peace. He will always be in our hearts :(

To my brother and my friend--may your memory be eternal! I love you.

Travis
Friend of the Family

Even though I did not get to take many classes from Jeff, he was a constant in the department. His spirit, drive, and creativity were inspirational from every class and encounter in the halls. It is hard to imagine the place without him. He created some incredible work, and he will be greatly missed.

When I was in college, I expressed to my costume and make-up professor early on my dream of being a cat on stage. It was a dumb dream and totally not something I thought he would he would take as a real statement. After the Picasso painting I choose for my final advance make-up exam, I probably had moved past my dream of being a cat onstage. Much to my surprise my senior year Jeff had created a role for two CATS!

Jeff taught me pattern-making, made me sew my entire name in on one stitch, dying techniques, found an unnecessary spot for my cat dream, joy in a team and let’s be honest had the best office of any professor on campus! ❤️ to him always and his family!!

Jeff was an inspiration and a creative genius. Learning from him was an honor. His talent was endless, he will be greatly missed. On a recent visit to Viterbo, I got to visit with Jeff and other faculty, but didn’t know it was my last conversation with Jeff, he was so young. I will cherish all of the memories from stage makeup class, costume practicum, and the numerous Viterbo productions we worked on together. Jeff taught me 2 very important life lessons... 1) It’s easier to ask for forgiveness than permission (so true isn’t it) and 2) If your pants have belt loops, wear a belt!

Rest In Peace Jeff, we miss you so much already.

Jeff was an incredible mentor and advocate for students. He will be remembered for his welcoming heart, his joyous spirit, and his dedicated hard work and commitment to the arts.